HAVE YOU SEEN OUR NEW HOME FOR JOPLIN NEWS FIRST?

HAVE YOU SEEN OUR NEW HOME (TEMPORARY) FOR JOPLIN NEWS FIRST?
They are still working out kinks.  I feel like Regis Philbin.  They are ALWAYS working out kinks.  lol. Anyway use this link until I get them to use the correct one and put our twitter, IG, YouTube and FB back up with our original content. 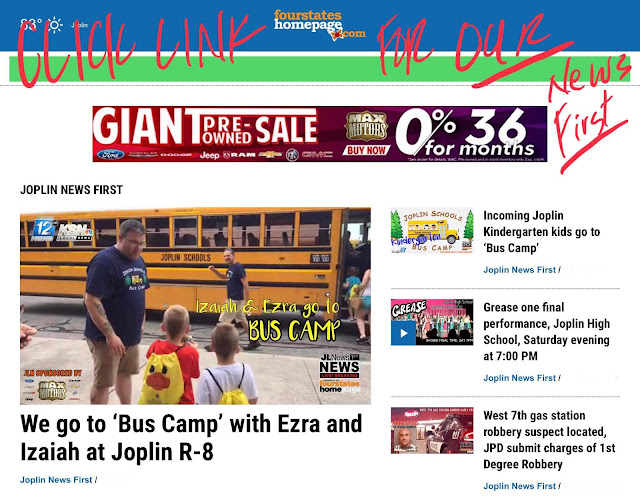 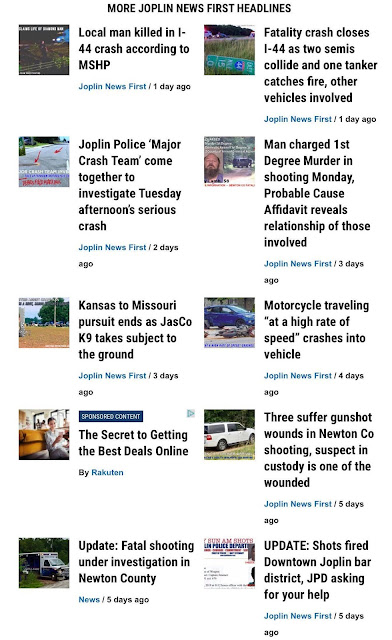 at June 22, 2019
Email ThisBlogThis!Share to TwitterShare to FacebookShare to Pinterest

We go to ‘Bus Camp’ with Ezra and Izaiah at Joplin R-8: Ezra is the big brother, he’s a pro. He assured us he’s ridden the bus before. Izaiah is the little brother and he’s going to be in Kindergarten this year at Irving Grade School i… 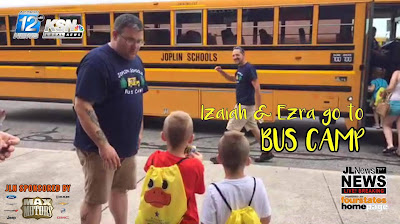 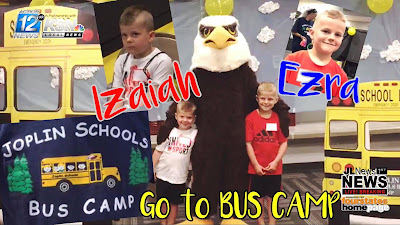 at June 22, 2019
Email ThisBlogThis!Share to TwitterShare to FacebookShare to Pinterest

at June 15, 2019
Email ThisBlogThis!Share to TwitterShare to FacebookShare to Pinterest

DWI charges for driver who rolled off E 7th into Ewert Park creek Saturday: Joplin Police Department update us Monday with more information from the weekend rollover into Ewert Park creek.
at June 13, 2019
Email ThisBlogThis!Share to TwitterShare to FacebookShare to Pinterest 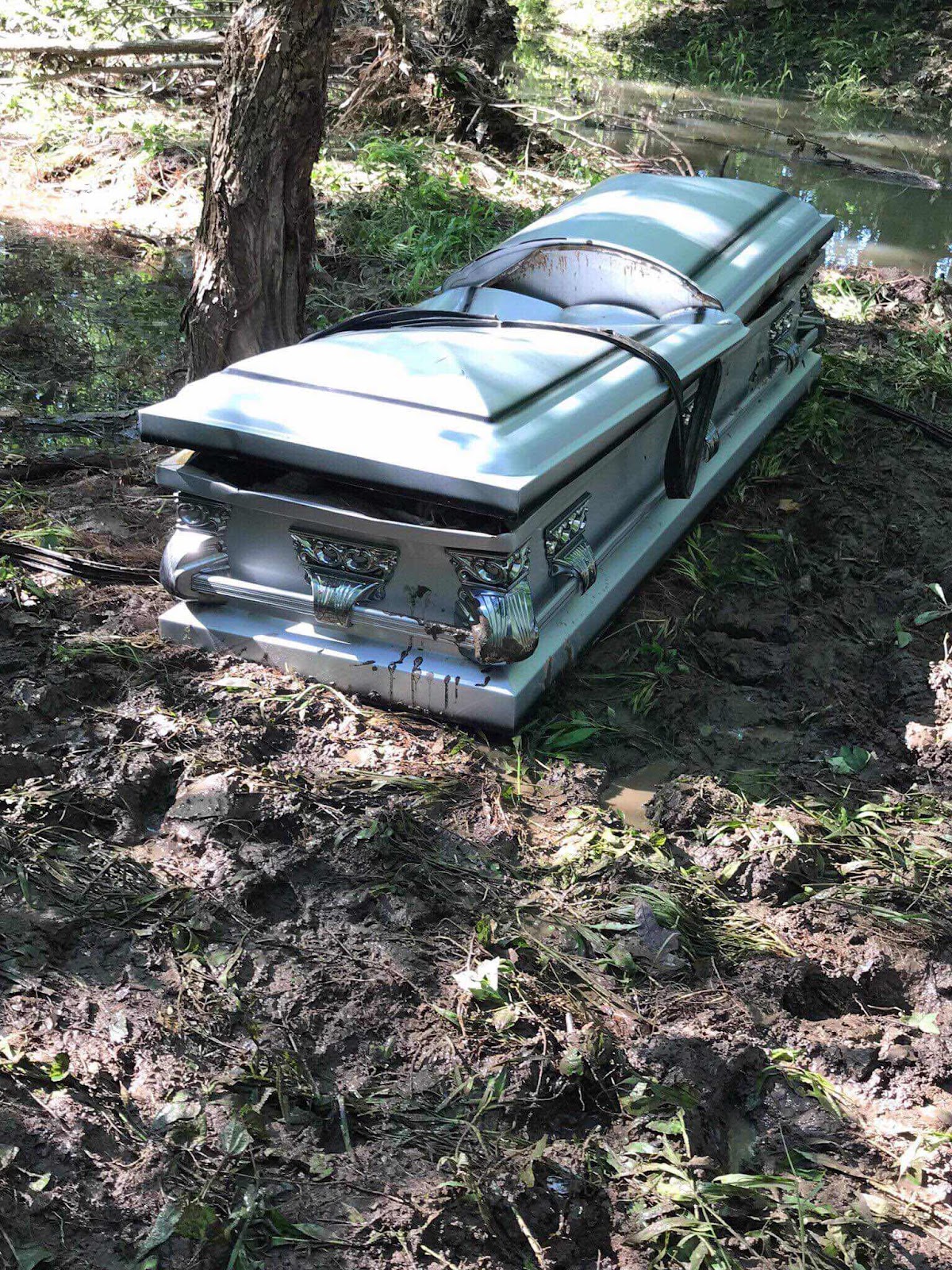 
at June 13, 2019
Email ThisBlogThis!Share to TwitterShare to FacebookShare to Pinterest

MOUNT VERNON, Mo. - Three teens from Aurora have been charged with felony property destruction and misdemeanor trespassing in connection with vandalism on June 4, 2019, at the Aurora municipal swimming pool.

Court records indicate that inflatable pool play equipment valued at $5,700 was slashed during the overnight incident.

Probable cause statements in the case state that two individuals who wished to remain anonymous told law enforcement that 17-year-old Curtis Michael Lee Board had told them he and two other Aurora youths had crawled over the fence surrounding the pool and slashed the play equipment.

The city manager says they jumped the fence and tossed furniture in the pool,  Slashed several holes the new city floatie and caused other damage totaling $4,000 in losses.

The pool is remaining open and new security measures are going into place.

...ON VANDALISM IN LAWERENCE COUNTY.

VANDALS CAUSED THOUSANDS OF DOLLARS IN DAMAGES AT LEE CEMETERY IN VERONA AND TWO DAYS LATER DAMAGE TO THE CITY POOL IN AURORA.

TODAY -- THREE TEENAGERS WERE CHARGED WITH THE CRIMES.

OUR MELANIE CHAPMAN TELLS ABOUT THE INVESTIGATION INTO THESE FELONY CASES.

MORE THAN 50 HEADSTONES WERE DAMAGED AT LEE CEMETERY IN VERONA OVER THE MEMORIAL DAY WEEKEND. SOME OF THEM DATED BACK TO THE EARLY TO MID 1800'S.

THE SUSPECTS WERE ON THE RUN BUT TODAY THREE 17 YEAR OLD MALES ARE FACING FELONY CHARGES IN THIS CASE.

ARE CHARGED WITH 1ST DEGREE PROPERTY DAMAGE AND INSTITUTIONAL NDALISM. DESTRUCTION OF CHURCHES OR A CEMETERY.

Sheriff Brad DeLay 2:42 They are facing some very serious charges and for a 17 year old to possibly start out with felonies on their record is just not the way you want to start your life out.

THE PROBABLE CAUSE STATEMENT SAYS THE THREE WORKED TOGETHER TO PUSH THE THE TOMBSTONES OVER AND THAT ALL THREE HAD BEEN DRINKING THAT NIGHT.

DeLay 2:35 Probably something at this point they are regretting doing and they are probably wishing they could take some of that tiem back.

IT DIDN'T STOP THERE...A COUPLE DAYS LATER PROSECUTORS SAY BOARD AND LEVAN JUMPED THE FENCE AT THE AURORA CITY POOL AND CAUSED THOUSANDS OF DOLLARS IN DAMAGE. THEY ALSO FACE SERIOUS CHARGES IN T HAT CASE. ALONG WITH

..19 YEAR OLD KYLER LAMASTUS. LAMASTUS IS ONLY FACING CHARGES IN THE POOL DAMAGE. ALL OF THEM ARE FROM AURORA AND TIPS STARTED COMING INTO TO THE AURORA POLICE DEPARTMENT AND THE DETECTIVES PASSED ON THE INFORMATION TO THE LAWRENCE COUNTY SHERIFF'S DEPARTMENT. THE CASES WERE LINKED.

DeLay. Unfortuanly we've probably all done stupid things when we were kdis but we have to realize

that some of this stuff is again irreplaceaalb. It belongs to other people. Its family member its family history. Things that you can't replace and unfortunalty some of those people will never recover any of that.

ALL THE TEENS COULD BE LOOKING AT YEARS BEHIND BARS. IN LAWRENCE COUNTY. MELANIE CHAPMAN. OZARKSFIRST. 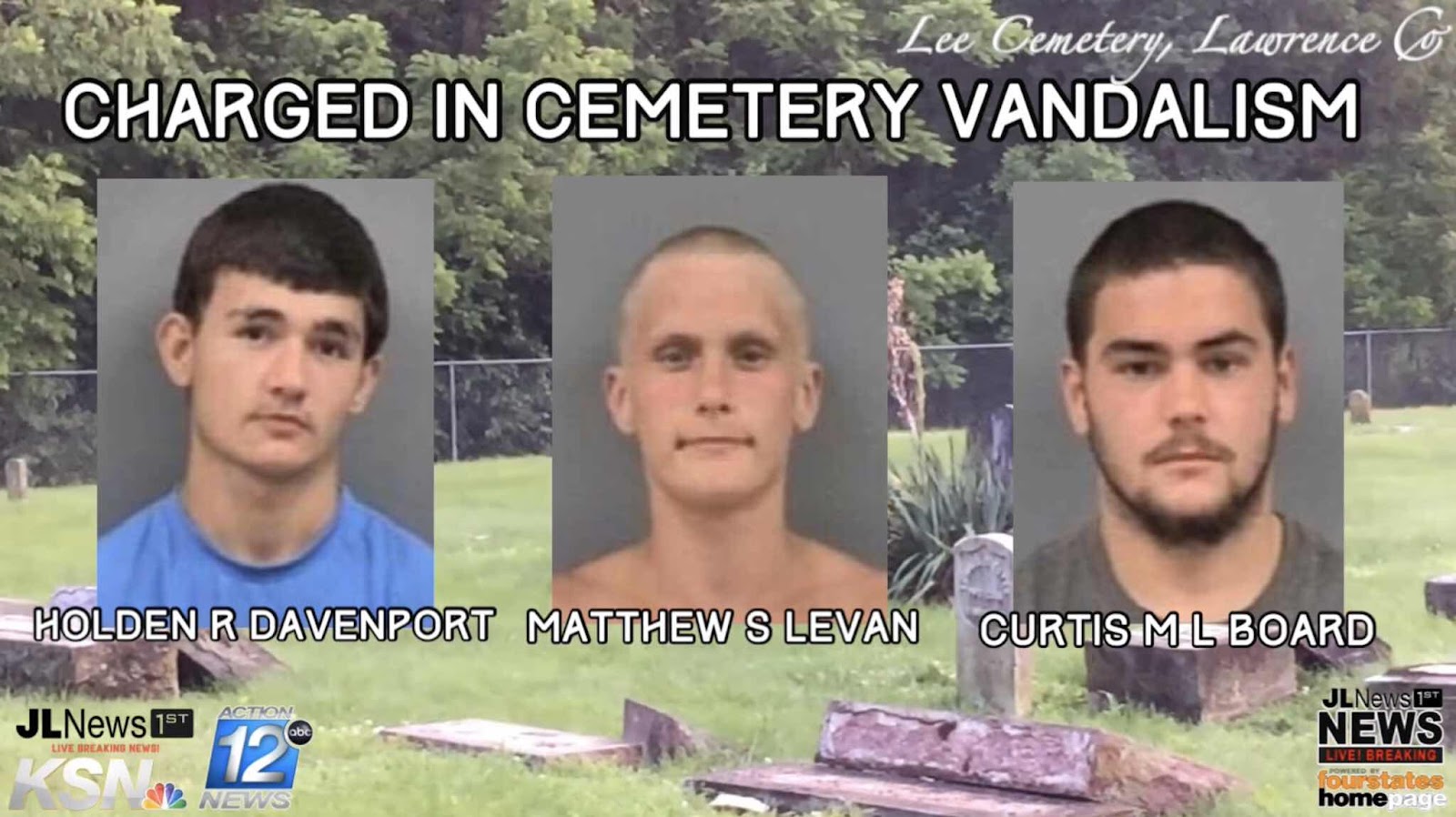