Open Letter From A Former Resident About the STINK

Hi. I'm from New Mexico, but grew up in Joplin. I've been a wastewater systems operations specialist for over 40 years. I learned about the sludge (biosolids) disposal issue in Joplin this week when a friend asked me about it.

You guys need to be calling the Mo Dept of Natural Resources enforcement folks to complain, not the city. They can investigate and determine if regulations have been violated. I have included the contact number in the response post. 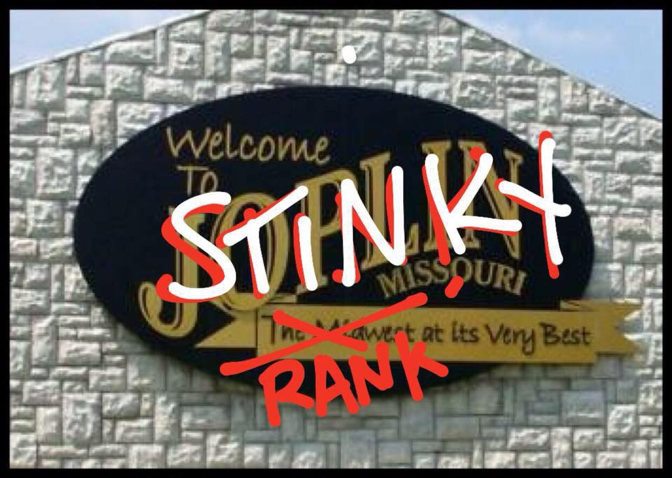 Here's my response:  After reading the article I made some phone calls and ran some basic design calculations related to sludge production for a system Joplin’s size. I believe that something dramatic happened at the treatment plant. So do the regulators I spoke to today at NMED and MoDNR. And the City may have left out some of the details regarding the situation.

First the facts (as we know them):

Joplin owns 45 acres that is used for sludge (Biosolids) disposal. Most large municipalities do.
They also have a permit from the Mo. DNR that allows them to land apply those solids.
They recently admitted to dumping 400,000-500,000 gallons of those solids on the property in one week.
There are significant odor issues at the disposal site.

I’m assuming here that Joplin has an anaerobic (like a heated septic tank) digester process to treat their sludge. A plant the size of Joplin’s should produce about 12,000-15,000 pounds of raw sludge each day. That sludge goes to a set of digesters, where they should achieve a 65% reduction in organics over 30-45 days. So they get 4,000-5,000 pounds of organically stable biosolids out of the process each day. That represents about 4000-5000 gallons of treated sludge (10-12% solids). That sludge should no longer produce the objectionable odors because all of the easily degradable organics have already been stabilized. It is routinely applied to disposal fields without more than a musty compost kind of odor.

So why are there odors?

If the sludge is not properly treated the remaining raw organics will continue to breakdown anaerobically after application and release those offensive “sewer gasses.” The admission that they felt compelled to put out half a million gallons (probably more) of “treated” sludge in a week is highly unusual. The trucks that spread it hold 2000 gallons, so that’s 250 truckloads in a week or 35 loads a day or one every 45 minutes. Most experts would say that you would only do that if there is some kind of emergency. But the city didn’t say they had a problem.

A system this size would have a digester capacity of about 400,000-500,000 gallons. That means they dumped a volume of sludge equal to everything in the digesters. That’s not very likely because no one holds that much “treated sludge” on-site. Or they emptied their digesters, which is not properly treated biosolids, for some yet unknown but very serious reason. I believe it was the later.

First there needs to be some detective work. The way we determine if digester sludge is properly treated is to check the pH. If the pH is at or above 7.0, the sludge is considered to be biologically stable. If it is below 7.0, there are still undigested organics present that will cause the odors. So, if we can get a “soil” sample and check the pH, we can determine if “raw” sludge was applied. If it’s below 7.0, they dumped improperly treated sludge. This should be done soon, as the pH will rise as the breakdown runs to completion. There could also be a health-related containment issue if runoff leaves the property. Maybe a TV station can get one?

The next step is to contact the SW Regional office of the Missouri DNR in Springfield and log a complaint against the City. They will send an enforcement agent to investigate.

If they dumped improperly treated waste and didn’t tell MDNR they have violated at least one regulation. There are criteria that must be met to prove that the sludge is properly treated. The testing needed to make that determination must be documented. Dumping improperly treated sludge may also require a special permit, with special criteria for disposal, from the State. If they didn’t get one, that is also a violation. If they dump substandard sludge on the site it must also be injected below the surface or plowed under within six hours of application. This is done to minimize odors. I’m guessing that didn’t happen here. And I think they are lying about the volume. They should know within 1% how much they applied because it must be logged in their monthly reports to the State. 400,000-500,000 gallons is way outside their margin of error for reporting. They should know that number to within a few thousand gallons.

I talked to the head of the certification office at MDNR today. When I told him what I had learned and suspected, he agreed and suggested that you guys get in touch with the Regional Office in Springfield to file a complaint and request an on-site investigation.

The number for the Springfield Office is: 1-417-891-4300. First, try to get in touch with Tina White. She is the Section Chief for Enforcement. If you can’t get her, then try her boss, Kevin Hess, Environmental Manager. He must have thought it could be a big deal if he gave me the Regional Manger’s name.

UPDATE: I went to the WW website and found that I underestimated the flow. I did not include flows at the Turkey Creek plant. That means my sludge production numbers are incorrect and low. That doesn't negate the disposal issues though. That 500,000 gallons of sludge is still 250 tons of solids in a week. Sorry. I should have done my homework better.