LIVE! PD TV Show is NOTHING Like #JPDIncidentSpotlight - Don't Try to Compare the Two

LIVE! PD TV Show is NOTHING Like #JPDIncidentSpotlight
- Don't Try to Compare the Two
(64804/64801) -- In Joplin this is not a tv show we are talking about. #JPDIncidentspotlight is a vague social media post that has been squashed by City Manager, Sam Anselm. This has all come to light since a Sunshine Law request from KOAM TV 7.
In that communication he asked that the JPD stop doing their daily or as-needed #jpdincidentspotlight because it made the city seem like it had a problem with crime. They were quietly stopped December 28, 2017. 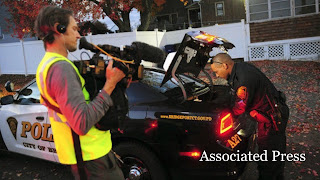 Joplin News First friend, Steve, shared this Tulsa story with our staff. Although it's interesting to note that it's a fine legal line to walk when you are doing a LIVE! broadcast with a 5 minute delay. As one reader said today "innocent until proven guilty". Um not many names here that a judge hasn't already put a warrant out with their name on it.
#JPDIncidentSpotlight was a 'vague, nameless, statement that doesn't include names unless there are warrants or dangerous actions which a person would be named'. They helped to inform the public what was happening where we live.
Please note that the only person named below is someone wanted for a 'buttload of crap' as Nacho Libre would say.
SOME EXAMPLES OF THE FORMER #jpdincidentspotlights:
###
On November 7th at 8:14am one of our officers stopped two males for walking in the middle of the road at 10th and Jackson. One of them, a 31 year old male, was found to have a domestic assault warrant from the city. Once arrested, it was discovered he had a light bulb in his coat pocket that had been transformed for smoking meth. It had burnt meth residue in it. He also had a baggie of meth. Felony Drug charges submitted.
###
On 10-31-2017 during the course of the evening several officers and detectives worked together to insure that 114 sex offenders in the city limits of Joplin were compliant with the Halloween law pertaining to them. Officers generated 31 reports of possible violations for further investigation and made 3 arrests.
###
This morning Oct 19 at about 430am Officers were dispatched to the 700 block of West 1st. The resident reported hearing glass breaking to the south and then saw three people leaving the area on bikes. Officers were able to get into the area quickly and located all three people. It was discovered that forced entry had been made at 102 and 108 S. Sergeant. The owner of the properties was contacted. The owner described some of the items she found missing and the items were located on the three people that officers contacted. They were also in possession of a stolen bicycle that had been stolen from the residence at an earlier date. These subjects are also suspects in the bicycle theft at North Middle School yesterday. That investigation is on-going.
###
On 9-23-17 at 2:39am our officers responded to a suspicious vehicle call at 605 West 25th. Caller said a white pickup truck kept driving back and forth in the apartment complex. Officer located the pickup occupied several times. They arrested the driver, James E Colley, 34, Joplin for a Jasper County Robbery warrant with $500,000 cash bond and a probation and parole warrant with no bond. He was also found to be in possession of approximately 129 grams of meth, other people's identifications and a counterfeit $100 bill. Those new charges resulted in an additional $10,000 cash bond over the weekend. Thank you to the alert citizen for reporting suspicious activity.
###
Click Here to See Tulsa World Article About LIVE!PD
at January 15, 2018
Email ThisBlogThis!Share to TwitterShare to FacebookShare to Pinterest
Labels: #jpdincidentspotlight, A&E TV, Joplin Police Department, Tulsa World
Newer Post Older Post Home