FROM THE JOPLIN POLICE DEPARTMENT:
Our officers who are working this evening tracked down and arrested Jacob Davis just a few minutes ago at a local apartment complex in Joplin using good police work. We appreciate their efforts in getting him into custody for the shooting incident Thursday night. Thank you to the community as well!
### 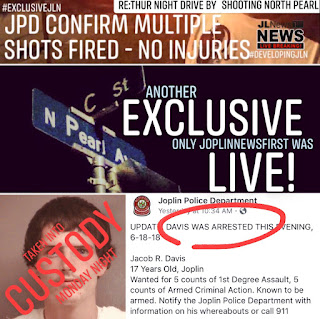 UPDATE -- DRIVE BY SHOOTING>>> ANOTHER ARREST THIS TIME AT OXFORD APTS

-Joplin News First exclusive, other media didn't report the next day until INSIDE JOPLIN carried a story
-Jacob Davis, 17, taken into custody last night at Oxford Apartments, he was wanted on charges related

The occupants of the home were there at the time as bullets pierced the house.

After confirming details with the Joplin Police Department they were picking up shell casings in the street and told us exclusive information. Then we reported LIVE! At the scene.

Hours later in a police pursuit from Joplin to Labette County, KS a vehicle was finally stopped with 4 juveniles. 1 adult – Marquis Saunders, was taken into KS custody while charges in Jasper County are pending including: FELONY resisting arrest by fleeing in a vehicle, 4 counts of endangering the welfare of a child and charges and possible charges related to the drive-by shooting earlier that night.

This is still an on-going investigation. Joplin News First is following...

Remember if it's LIVE and breaking news you'll find it here...