​ The Joplin area had seen an increase in thefts of packages that were delivered and left on porches. Other surrounding communities saw the same activity. With the assistance of eye witnesses and home-surveillance videos, the Joplin Police Department was on the look-out for an older style Red Ford Escape and a white male suspect. That information was supported by other area departments sharing information about a Red Escape being the suspect vehicle. The investigation had identified a partial license plate as well for the suspect vehicle.

​On December 2nd, 2017 at 7:19pm a Joplin Police Department Patrol Corporal was on regular patrol at Valley and St. Louis. He saw a red, 2003 Ford Escape turn west onto Valley from St. Louis. The license plate was consistent with the license plate we had, and the vehicle matched the surveillance videos of thefts we had reviewed. The officer stopped the vehicle as it pulled up to 1609 East Valley to further investigate. The driver of the vehicle, Phillip L. Bishop, Joplin, was wearing the same clothes as he was captured on video the day prior committing a theft from a porch in central Joplin.

​Detectives and Officers searched the residence they stopped the vehicle at, and located a large amount of suspected stolen items. They were all brand new in different stages of packaging and boxes. More than 130 separate items were seized. Bishop was initially booked on a traffic offense and misdemeanor stealing for the theft the day prior. Detectives are working on linking the property to the theft reports and identifying victims, and additional charges are expected. Anyone who has experienced a package theft is encouraged to report it to the law enforcement agency in which jurisdiction they live. That initial report is needed before we can verify who owns which stolen property. We also ask from patience from victims as this process is time consuming. 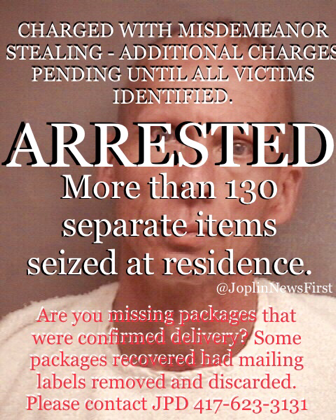 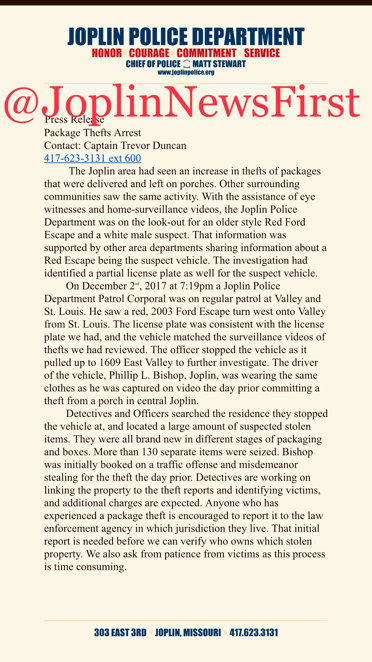