#JPDincidentspotlight But We Doctored Our Video

***WARNING: REAL STORY BUT WE DOCTORED OUR VIDEO***
Press Release
Shooting Arrest
Media Contact: Captain Trevor Duncan
417-623-3131 ext 600
On December 11, 2017 at 9:45pm officers responded to 1808 West 20th for a report of shots fired. The caller had called to report that a male at the residence had fired a shot behind the residence and then fired a second shot through the glass window on the back door. The suspect was a friend of victim who lived in the detached garage behind her residence. The male had then entered the residence and wouldn’t let her leave, while still armed. She was eventually able to leave and call for help.
Officers responded to the area and initially couldn’t find the suspect who had left in a green van. Shortly thereafter, one of our officers spotted the suspect vehicle southbound on Maiden Lane from 24th, driving with no lights and committing traffic violations. Before the officer tried to stop the van, it pulled into a parking lot at 26th and Maiden Lane. It then exited and drove north on Maiden Lane to Wal-Mart Neighborhood Market, west through the lot, south on McCoy back across 26th street and got stuck in a field, all while the officer tried to stop the vehicle with lights and sirens. The male ran on foot and was arrested.
The suspect, Waylon Durison, 34, Joplin, was arrested for Driving While Intoxicated, Resisting Arrest, kidnapping, unlawful use of a weapon, felon in possession of a firearm and 4th degree assault. Charges have been submitted to the Jasper County Prosecutor’s Office. There were no injuries from this incident. 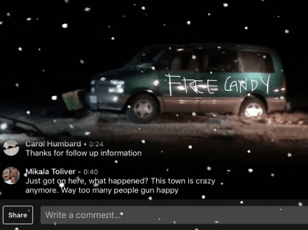